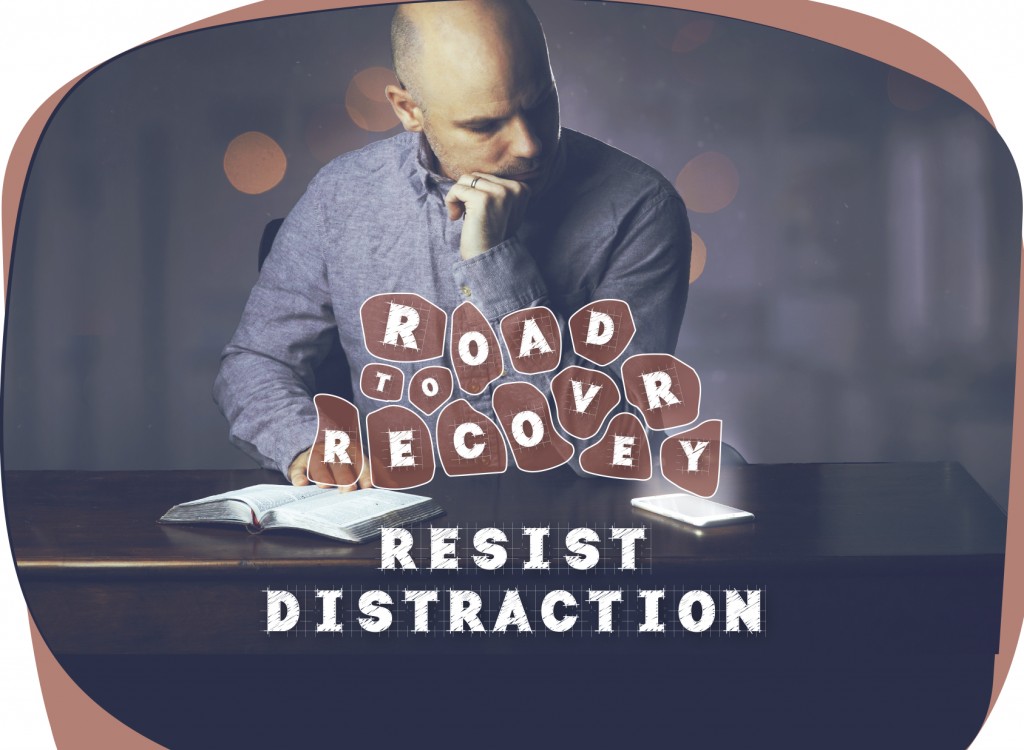 The lead car hits the wall or runs out of fuel in the last lap. A penalty kick is blocked or swings wide. The last ball of the last over clears the boundary for 6 and a match is decided. A runner/rider celebrates too soon and they’re overtaken in the last 100th of a second. It’s not enough to start something…you have to finish…and finish well. Nehemiah is in the home stretch of rebuilding the wall around Jerusalem. He can see the finish in record time. But it’s at that moment that we’re all vulnerable. It’s at that moment, with the end in sight that distractions pose the greatest threat. When we resist distraction and carry out the work to which God calls we honour God, bless people, and actively demonstrate God’s rule to the world in a way that enemies are defeated and outsiders are drawn into God’s salvation. Nehemiah is not just rebuilding a wall or a city; he’s restoring God’s people to theirGod-designed purpose, call & work in his world. And nothing can distract from or interfere with that effort reaching its completion.

#5 in series: Road to Recovery

When word came to Sanballat, Tobiah, Geshem the Arab and the rest of our enemies that I had rebuilt the wall and not a gap was left in it—though up to that time I had not set the doors in the gates— 2 Sanballat and Geshem sent me this message: “Come, let us meet together in one of the villages on the plain of Ono.”

But they were scheming to harm me; 3 so I sent messengers to them with this reply: “I am carrying on a great project and cannot go down. Why should the work stop while I leave it and go down to you?” 4 Four times they sent me the same message, and each time I gave them the same answer.

5 Then, the fifth time, Sanballat sent his aide to me with the same message, and in his hand was an unsealed letter 6 in which was written:

“It is reported among the nations—and Geshem says it is true—that you and the Jews are plotting to revolt, and therefore you are building the wall. Moreover, according to these reports you are about to become their king 7 and have even appointed prophets to make this proclamation about you in Jerusalem: ‘There is a king in Judah!’ Now this report will get back to the king; so come, let us meet together.”

8 I sent him this reply: “Nothing like what you are saying is happening; you are just making it up out of your head.”

9 They were all trying to frighten us, thinking, “Their hands will get too weak for the work, and it will not be completed.”

But I prayed, “Now strengthen my hands.”

11 But I said, “Should a man like me run away? Or should someone like me go into the temple to save his life? I will not go!” 12 I realized that God had not sent him, but that he had prophesied against me because Tobiah and Sanballat had hired him. 13 He had been hired to intimidate me so that I would commit a sin by doing this, and then they would give me a bad name to discredit me.

14 Remember Tobiah and Sanballat, my God, because of what they have done; remember also the prophet Noadiah and how she and the rest of the prophets have been trying to intimidate me. 15 So the wall was completed on the twenty-fifth of Elul, in fifty-two days.

16 When all our enemies heard about this, all the surrounding nations were afraid and lost their self-confidence, because they realized that this work had been done with the help of our God.

When all our enemies heard about this, all the surrounding nations were afraid and lost their self-confidence, because they realized that this work had been done with the help of our God. Nehemiah 4:16

Only when you know a deeper "Yes"

- the great work to which God has called you -

are you able to say "No" to distractions.

More from 'Road to Recovery'

It’s called a “rip” – short for rip current. Surfers/beachgoers know to beware of these strong, focussed currents of water moving directly away from the shore. They pull you away from solid footing, away from safety & into dangerous water…often while you don’t fully notice what’s happening.

Sin is a perpetual “rip” humans have to guard & fight against. Part of the fabric of our lives is an inborn tendency to pull back from God & toward our own wants, wishes, & desires…away from solid footing, away from safety & into dangerous territory…sometimes so reflexively we don’t even notice that we are entering a rip zone. That’s where we need each other to hold us accountable, to point out the danger, to guard us from being pulled out and away from God through the powerful rip and grip of sin. Today Nehemiah calls God’s people to swim between the flags of God’s Word; between God's promises to his people and his call to a faithful daily living of his holy purposes here and now. Today, as we dive into the ocean of our daily lives with confidence; his Word written in our hearts, his Spirit watching over us and working within us, and with brothers and sisters beside us for support and safety. For every word true for God’s people then, is true for us today.

#7 in series: Road to Recovery

The moment…you rediscover something great in the bottom of the drawer that you had long forgotten about. The moment…you come across a photo from years ago that brings the memories flooding back. It’s the story behind the story that triggers the emotions, reconnects you to your roots, re-establishes your present and reorients your future. For the people of Israel, this is the moment. The walls have been rebuilt, their hearts are being renewed. But it is only as they reengage the Word of God, that the real journey on the Road to Recovery comes into focus.For when people gather to hear the Word of God and understand it in the context of their lives, they discover the story behind the story; a story that revives their appetite for God, reinvigorates their worship and restores their community. And that community is commissioned to live from overflowing joy that releases healing, blessing & life to the world. Joy healing blessing & life equal to the crying need in our hearts & in our community right now.

"Never ask someone to do what you are not prepared to do yourself.' It's a leadership principle that every successful leader learns and which Nehemiah demonstrates repeatedly through the rebuilding of Jerusalem's wall. But the rebuilding of the wall is just the first stage of a much larger and more difficult renewal project that needs to occur; the reformation of people's hearts as they are restored to their God-designed purpose and work in this world. As Israel's hope is renewed, as they start to feel safe, secure and protected again, the people revert back to old habits…living selfishly and for their own agenda. So when Nehemiah discovers a widening economic rift in God's people, he's swift to act, regardless of the risk to his influence as a leader. For just as the walls of the city need to be rebuilt on strong foundations, so do the lives of God's people. Nehemiah brings them back to their spiritual foundations, calling them to renew that covenant and live in their covenantal identity. We too are called to daily renew the covenant of grace that shapes our identity; a covenant sealed in the blood of Christ and poured out as a living sacrifice for the world. It's a powerful step in our journey on the road to recovery.

#4 in series: Road to Recovery

Halfway through the rebuild of Jerusalem's wall, the opposition came from without and the pushback from within. But Nehemiah demonstrates a faith-filled way to Repel opposition that comes when we begin to live God's vision into life-changing reality and lead people on the Road to Recovery. While the work of God will always arouse the opposition of enemy, God is in control & continues the work of his kingdom through us, whatever the challenge. It's a timely reminder when discouragement comes and pushback occurs.

#3 in series: Road to Recovery

They've been one of the most searched items on the internet behind toilet paper, sanitizer, disinfectant wipes, baking goods, tech gear and fitness items - the jigsaw puzzle. From 10-1000 pieces or more, there's structure, there's order and it's an activity that builds community (by-standers always join in!). Jigsaws inspire you toward a specific result, engage you and others and their impact always leads to a sense of achievement and joy. Vision works in the same way. Individual and seemingly random, unrelated circumstances - often what looks like chaos - are brought together and connected to form a beautiful masterpiece that is life-transforming, eternity shaping and creates delight for all who participate in it. That's what we'll explore today as Nehemiah recasts vision; a vision not just of a wall rebuilt but of a people restored to their God designed purpose and work in this world. It's a vision to which Nehemiah invites others to join him in working out a future that’s more glorious than people could ever imagine. In chaotic times, we too are called to recast vision and participate in a God-given plan that inspires with hope, fully engages our lives and impacts the community eternally as God leads us out of uncertainty on the Road to Recovery.

#2 in series: Road to Recovery

The most watched hour of TV in the last month? State of Origin? No. Ash Barty’s Wimbledon win? No. It’s the 11a.m. daily briefing by the Premier & State Health officials on the current state of the Coronavirus that has sent us into lockdown. The nation stops, watches and holds its breath to see if infection and community transmission numbers are climbing falling or holding steady. We drop into suspended animation, hoping there’s an end in sight to the lockdowns; waiting for someone to lay out a road to recovery that isn’t cut off by a new variant or breakout. We’re alive but not fully living…like the disastrous conditions facing the Jewish remnant who returned from exile to Jerusalem. They were trapped in a captivity mindset far from the vision God had for their lives.

Nehemiah was still in Babylon but his heart was burdened for those who were free but not living in freedom. He was heartbroken for those who had settled into complacency amidst the chaos. But rather than blaming or shifting responsibility; Nehemiah accepts his part in the situation and lives the truth of Isaiah’s words, “In repentance & rest is your salvation; in quietness and trust is your strength…” – Is 30:15. The Road to Recovery begins with Repenting of the Rubbish and turning our eyes to the one who alone is faithful to all his promises and can help this nation and his church truly recover.

#1 in series: Road to Recovery